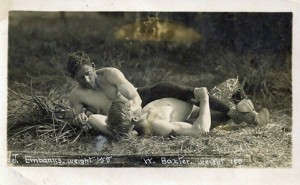 Of all the many gay-themed Web sites out there, this one, Woolf and Wilde, is one of the Grumpy Vegan’s all-time favourites.

Obviously named in honour of two literary icons, Woolf and Wilde bring together photographs depicting intimacy between men sometime ago with poetry which adds intense meaning and fresh insight.

Were these two men wrestling in the countryside lovers? Indeed, are they wrestling at all? The poem suggests that they maybe but we will never know. Which is fine by the Grumpy Vegan. Because the look between them and the body language suggests intimacy between men which, if it were more prevalent today, would surely help to dissolve all that stupid, silly macho nonsense we all have to put up with for no good reason.

You are a murderer

No you are not, but really a wrestler

Either way it’s just the same

For from the ring of your entangled body

Clean as leather, lustful as a lily

Will nail me down

(In fact, it’s thinking nothing)

When the forehead slowly moves and closes the heavy eyelids

Inside, a dark forest awakens

A forest of red parrots

At the end of the forest a vine

Covers the house where two boys

Lie in each others arms: I’m one of them, you the other

In the house, melancholy and terrible anxiety

Outside the keyhole, a sunset

Dyed with the blood of the beautiful bullfighter Escamillo

Scorched by the sunset, headlong, headfirst

If you’re going to open your eyes, nows the time, wrestler

This entry was posted in The Grumpy Vegan Life, Thinking and tagged Website of the Week. Bookmark the permalink.